Group Interviewing: Getting Ready For Interviews that Aren’t As Conventional 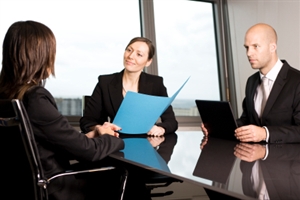 If you were to ask somebody to describe the setting of an interview for an internship or career of some kind, you have a pretty good idea of what the common theme is going to be. Likely, the setting is the office of somebody high up in a company or a part of human resources going through your résumé with you and asking certain questions about what type of a person you are. For the most part, this is the right idea, and there is no doubt that you will experience this form of interviewing in your life.

Rewind now to this fall, where as a freshman still finding my way around the campus, I looked at becoming an orientation leader during the summer to get a good leadership role onto my résumé. I was expecting the same thing; a one on one interview with an individual from Orientation Services talking about what I’ve done at UConn and everything in between.  However, this ended up not being the case. Instead, the post-application recruiting process began with group interviews, where multiple students took part in activities together while people from Orientation Services watched us work. This was an aspect of the interview process I was unprepared for, and ultimately caused me to not get the job.

In recent years, more extreme forms of interviewing, such as the group simulations that I experienced, have become the trend among companies as opposed to the more traditional form of interviewing. Interviews now range from simulation case studies and group interviews, to casual events, and even to settings with an entire board of important people within the company.  The way companies hire their employees is taking a massive, yet peculiar shift, so much so that Time Magazine’s Brad Tuttle compared modern day job searching to being on a reality TV show (Source: http://business.time.com/2012/02/21/how-job-candidates-now-resemble-reality-tv-contestants/).

Sounds like a challenge, right? Fret not though; through my mistakes in the group interviews, I’ve come to notice that the ways to defeat these challenges in the interviewing process are much similar to that of traditional interviewing. One common theme to remember for any type of interview, and something that I did not do well at all, is to do your research and prepare yourself. Get to know what kind of questions a company might ask and how a company may test your abilities. It may not even be about the material you present, they might just want to see how you compose yourself in difficult situations. I learned this lesson the hard way attempting to become an orientation leader, but if you prepare yourself for whatever a company may throw your way, the chances of walking out having made a good impression can be much greater, and you won’t end up like me thinking to yourself, “Oh well, maybe next year.”