The Role of Male Nurses 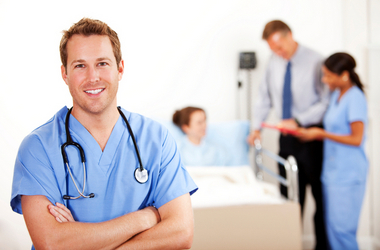 While nursing is seen by most people in American society as a woman’s job, historically, men actually played the larger role. It was men who created the field back in 250 B.C. when the world’s first nursing school was founded in India. From setting up hospitals that provided care during the Plague epidemic to tending to the sick and injured on the battlefields, throughout our world’s history it was actually men running the nursing industry. According to an article in USA Today, it wasn’t until the Civil War—when men became more engaged in other areas—that women started to take over the field.
However, in the last 30 years, the number of male nurses across the globe have started to rise. According to the American Association of Colleges of Nursing in 2011, men make up around 7% of all nurses. This same statistic is true of The University of Connecticut; as of 2014, 7% of the nursing student population is comprised of men. The looming shortage of nurses is one reason that this percentage will continue to increase. With a projected 260,000 nurse shortage by 2025, the only way this will be solved is if more men continue to enter the field. Another reason that male nurses are desperately needed is because of patient comfort. A key part of the health industry is making the patient feel comfortable while describing their symptoms and receiving care. Similarities to nursing staff–whether it be through economic background, similar social interests, and especially gender—often create that comfort in patients. The demand for male nurses is expected to steadily increase as the health care reform laws take effect and the population begins to age. William Lecher, president of the American Assembly for Men in Nursing, says “One day, men might actually make up 50 percent of the nursing workforce…That would be true gender inclusion and balance.”