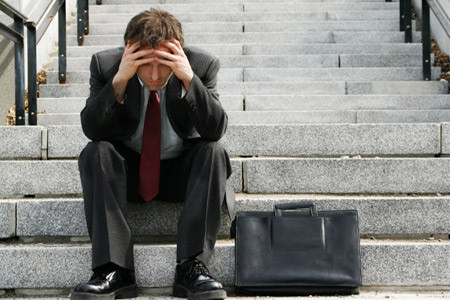 I think there are two types of people.  The type who fails,

1) buys a tub of Haagen-Dazs and melts into a puddle of despair; or the person that

2) dusts themselves off, gathers knowledge and wisdom from the failure and adapts their approach to try again.

The unfortunate thing about failure is the stigma attached to it. Nobody wants to fail. It can cause feelings of embarrassment, worry and sometimes apathy surrounding correcting the situation.

Use failure to your advantage

But what many people forget is that failure will happen almost as often as success in an average human life, and therefore learning how to deal with it in a way that will strengthen your resolve is essential.

Take for instance a student that since the age of fifteen wanted to be a business manager, and worked diligently towards achieving that goal throughout their academic career, only to be derailed during an internship during their senior year when they realized they found all the other interns’ work more interesting than their own. The student concluded being a manager was definitely not what they wanted to do with their career.

What failure is and why you shouldn’t panic about it

I’m not sure whether you consider this a ‘failure’, but it certainly can feel like one, at least temporarily, to the student that was pursuing that seemingly well-defined career trajectory.

Failure can come in various forms though; doing poorly on an exam, applying to jobs and getting nowhere, being denied entry into a course, or maybe emerging from university with just not quite the right blend of classes or degree you originally aimed for. The most important thing to do when you fail is to not panic. It doesn’t work that well as many of us can attest.

Five tips on how to deal with and learn from failure

Instead, consider the following tips for dealing with and learning why failure can actually be a good thing.

1) Failing at one thing may lead you into the path of something even better. Life is unpredictable, and not everything will go your way. But this doesn’t mean that only bad things will come from it. Maybe your failure will set you on a new path that leads to better things that you might never have considered otherwise? Maybe your ‘failure’ will actually turn out to aid you in your success? After all, Edison didn’t invent the light bulb on his first try, Milton Hershey flopped a few times before he successfully built the huge chocolate company that bears his name, and Ronald Reagan unsuccessfully ran for President of the United States before winning his party’s nomination for office on his third try.

2) Employers look for people who can deal with things not going right. Frequently asked questions from employers regard how you overcome problems and setbacks. If you can extract the good points from your failure, it can be an excellent example to give in a job interview and also show that you’re trying.

3) Don’t have unrealistic ideals. A good example of this comes when applying for jobs. Sending out only a couple of application forms and hearing nothing back is not a failure; it’s being unrealistic regarding how much work it takes to get a job, and thinking it will be handed to you overnight. Setting yourself unrealistic goals will only set you up to feel failure more painfully. Take things one step at a time, and acknowledge that success does not always arrive swiftly, but that also doesn’t mean it won’t ever come.

4) Failures only make success taste sweeter. Finding success takes time and hard work, but don’t let the struggle make you feel like a failure. Relish the challenge, embrace the rejections, approach each attempt with infectious curiosity and it will feel more rewarding when you do succeed.

5) Prepare yourself for the prospect of failure, and allow your plans to be flexible. This isn’t being pessimistic; this is being realistic and forward-thinking. If you apply so much pressure and expectation to one outcome, you are more likely to feel the disappointment more acutely if you don’t achieve it. Have back-up plans that allow you to move on and focus on something else if you do fail because it is vital to realize that your life does not hinge on just one mistake.

Good luck with your future career endeavors and remember, you’re only human.

This blog was adapted from that written by Catherine Skellern for RateMyPlacement.com, the UK’s leading website for undergraduate student job and internship experience.