For as long as I can remember, I wanted to work in the magazine industry. The day I received my internship offer from Cosmopolitan was one of the best days of my life. However, there are a ton of myths that surround the industry and everyone I knew began to fill my head with their beliefs. The night before I started my internship, while I was frantically trying on every item of clothing in my closet and meticulously straightening my hair, my list of expectations was a mile long and the nervous pit in my stomach felt about that deep. Over the next two months, I learned the reality of interning at Cosmopolitan.

Expectation: When I told most people I was going to be interning at a magazine, most people would chuckle to themselves and say “Have fun doing coffee runs all day.” I began to picture myself running (wobbling) around New York City in my high heels, balancing trays of coffee and stacks of magazines, all while talking on the phone and walking the editor’s dog. During less hectic days, I imagined myself glued to the copier or maybe organizing a file cabinet.

Reality: Most of the work was extremely stimulating. As a marketing and sales intern, I was there to support the marketing and advertising sales teams so my tasks varied each day. I did a lot of research to prepare salespeople for meetings and maintained a database of advertisements. I even conducted my own research project and was able to present my findings to an advertising executive. My favorite part, however, was observing live sales meetings. Cosmopolitan is always ahead of the pack and is working on some amazing things you will have to keep an eye out for.

In addition to the regular workload, Cosmopolitan holds sessions each week to educate interns on all the aspects of the magazine industry. Although I’m set on working in advertising, I was intrigued learning about production, public relations, digital design, distribution, and everything else that goes into creating a magazine.

Of course, as an intern anywhere, you should expect some level of grunt work. I occasionally had to make copies and organize closets around the office during my time there. I ran a few errands for supervisors, but they were mostly super fun like picking up champagne or flowers for a meeting. It is important to have the attitude that no job is too small for you or beneath you. Remember that you are there to make your bosses’ jobs easier, to make business run smoother. It might not be glamorous to bind together presentations, but in doing that you allow a salesperson to spend that time preparing for a meeting with a large advertiser. Believe it or not, your work is essential to keep business flowing and allow the sales team to make multimillion-dollar sales!

The Marketing and Sales Team

Expectation: I’m sure I’m not alone in how I pictured the full-time employees of Cosmopolitan. I expected each worker to be more fabulous than the last, dressed in designer clothes with flawless hair and makeup. Above all, I expected them to be cutthroat, intimidating, and maybe even mean like Meryl Streep in The Devil Wears Prada. They would have the right to be; the Cosmopolitan team is known to be one of the best in the business.

Reality: First things first: yes, the marketing and sales team members were very beautiful and impeccably dressed. I saw shoes I will probably dream about for the rest of my life. In this industry, the way you look really does matter; it just comes with the territory of working so closely with top clothing and cosmetic companies.

But more importantly, I was amazed by how smart and genuinely kind all of the employees were. I was shocked when all the employees tried to learn all the interns’ names. They hung up posters with all our pictures and names around the office, and made sure to always address us by names. Everyone was very kind when giving an assignment and were never annoyed by questions. The sales team is incredibly driven and aggressive, but never to the point that they are cannibalizing someone else’s business or treating people poorly. I was and am incredibly inspired by the team at Cosmopolitan.

Expectation: I was most nervous about the other interns. I was sure they would all be from fancy schools and make sure everyone knew it. We would all be vying to be the most impressive intern, and working as a team might turn out to be a cutthroat experience.

Reality: The other interns turned out to be awesome! There was zero cattiness. If someone was handed a large task, we would all pitch in when we could to make sure she finished on time. It really felt like a team, which made the whole internship much less stressful. We ate our lunch together every day in Columbus Circle or the Hearst Café. Okay, and we frequented the Chipotle across the street a bit more than I’d like to admit. I started taking the train out to Connecticut with one girl on the weekends and we even went out in the city together a few times. We still keep in touch in a group text and I hope they will come visit me here at UConn soon (If you’re reading this: I’M SERIOUS).

Expectation: I could only expect the Cosmopolitan office to be fabulous. I mean, this is where the magazine I had been obsessed with for years was made. The whole building would stand out on the skyline because to me it was the most important skyscraper in New York City. The actual office would be every girl’s dream, littered with makeup, magazines, and everything pink.

Reality: This one was pretty much spot on. I only have 2 fun facts to add here: Hearst Tower is one of the most environmentally friendly buildings in the city, and it has the fastest elevators in North America. My friends know how obsessed I was with the building; Hearst Tower and the view from the 38th floor was featured on my Snapchat Story or Instagram page almost daily (sorry, not sorry). I mean, check this beauty out: 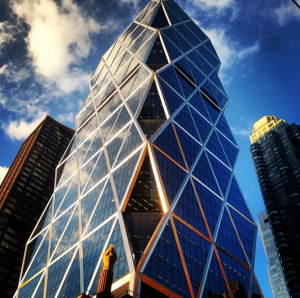 Expectation: Some people looked downright horrified when they found out I would be living in New York City in the summer. After all, I am from Farmtown, Connecticut (ok Suffield, but you get the idea). A million thoughts filled my head as I settled into my new apartment. What if I got lost on the subway and ended up in Queens? Would I really see rats? Would it really be overwhelmingly crowded all the time? My apartment was just a few blocks away from Central Park, so I planned on escaping the madness in there. Is the nightlife as good as everyone says?  Will the sidewalks be a constant fashion show? It can’t be called the “City that Never Sleeps” for nothing.

Reality: Everything above is true and I loved every second of it. Manhattan, I’m coming back for you real soon. 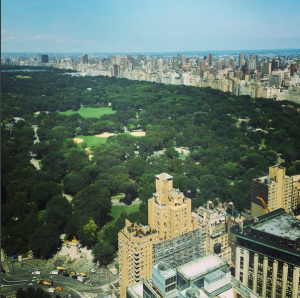 View from the office!