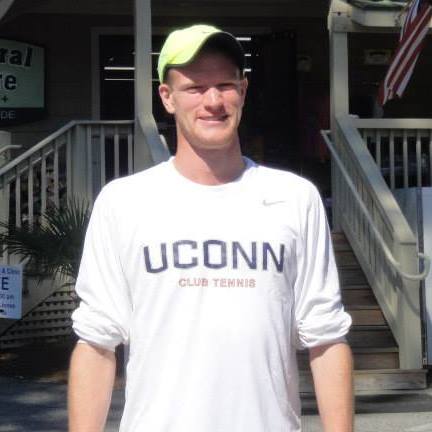 I actually came into UConn as a Civil Engineering student. I have always been intrigued by how structures are built, as well as architecture. I have to say I enjoyed the Statics and Mechanics of Materials courses I took as a Civil Engineer, as well as Geospatial measurement, but something was always missing. I didn’t realize what I was missing until the summer after my sophomore year. I was working for a professional tennis team, The Boston Lobsters, as the Assistant Director of Operations, and realized that I really wanted to pursue a career in the tennis industry. I felt like I couldn’t work in a field outside of tennis., because it is simply too important to me to not be involved with it. I chose to switch from Civil Engineering to Materials Science because I thought that was the best path to a career in a tennis related industry. My dream is to one day make tennis rackets, and a Materials Science background will definitely aid in that dream.

Describe your experience working for the Boston Lobsters. What have you taken away from it?

Working for the Boston Lobsters has been one of the best experiences of my life. During the first summer, getting ready for the two week season was a hard, grueling two month process. Between moving all the equipment, to digging trenches for electrical piping, to operating a gigantic hydraulic forklift to setting up the court itself, it was all a new experience for me.

My job with the Lobsters is one of the hardest jobs I have had, and seeing the end result on match days is truly worth it. I have a new appreciation for what goes on behind the scenes of sporting events, as well as the preparation that goes with it. I would also say that by far, the most important skill I learned and further developed was communication, because if everyone was not on the same page, it made the foreseen obstacles that much tougher. We could always expect something, however small, to go wrong at some point and we were always prepared and communicated well with each other.

Can you give us some background on the Eurotech Club and the role you play as Vice President?

The Eurotech Club is designed to help Eurotech students at UConn prepare for their experiences in Germany and beyond school. Some of the activities we do include: going on company tours (we try to focus on German companies), holding resume & LinkedIn workshops, and running fundraisers. We also try to hold social events, like going out to a German restaurant for dinner once a semester.

I have been a part of Eurotech Club since its inception because I was a part of the Eurotech Learning Community my freshman year. During my sophomore and junior years I was the club treasurer and this year I became the Vice President. My main jobs as Vice President are to help the President in any way I can and be present and active at executive board meetings.

What are some of your responsibilities as Men’s Captain and President of the Club Tennis team?

I became involved with club tennis as a freshman and once I made the team and went to practices, I realized that I wasn’t playing tennis to be the best anymore, but rather playing simply because I love the game.

My responsibilities as Men’s Captain and President of Club Tennis include: attending Club Sports Council meetings, organizing matches, sending out emails, and scheduling tournaments. By far, the most challenging and stressful part of my presidency was scheduling our tournament in Hilton Head, SC. I had to complete all of the captains’ tasks for the tournament. This included submitting a lineup, filling out waiver forms, booking hotel rooms and flights, and working with USG, which was difficult because I was new to the USG funding process. At one point I worried I wouldn’t be able to do it all, but with patience, help from the other officers, and a bit of good luck everything worked out and the trip was amazing.

Where do you hope to see yourself in 5 years?

In five years, I see myself graduated from college and developing materials for a sports related company. I would also like to work in a place where I could use the skills I have learned through both my German major and experience abroad.

I plan on furthering my education in the future, but I would like to see what my options are in terms of working before deciding to stay in school right away.

What advice would you give your fellow UConn students?

The most important advice I could give anyone would be to find your niche. Find what really makes you excited. This takes time, for some longer than others, but once you have found what you are most interested in you can pursue that and feel good knowing that the work you are putting in will be worth it.

I would also advise students to stay busy and stay active. I was fortunate enough to make the Club Tennis team as a freshman, and that has really kept me going throughout school. The groups of friends you will make through organizations you are a part of (even if it’s just one) will most likely turn out to be some of the strongest because you share a common bond.

College is what you make it. That’s one of the most cliché things anyone will ever tell you, but it’s actually rather accurate. When you go on college tours, the tour guides are always positive about their school, and more often than not, schools are presented to you in a very nice way. No matter what school you go to, there will be things you like and don’t like, but I can assure you that if you trust your gut, you will make the right decisions in regards to being active and connecting with the right people.

At the end of the day, students need to discover these things for themselves. Between my parents, friends, and past alumni, I’ve been given pretty much the same advice I just mentioned. The difference now though, is that I can give this kind of advice from the heart, and that’s pretty cool.