UConn Alums Want You to ‘Roast’ Them 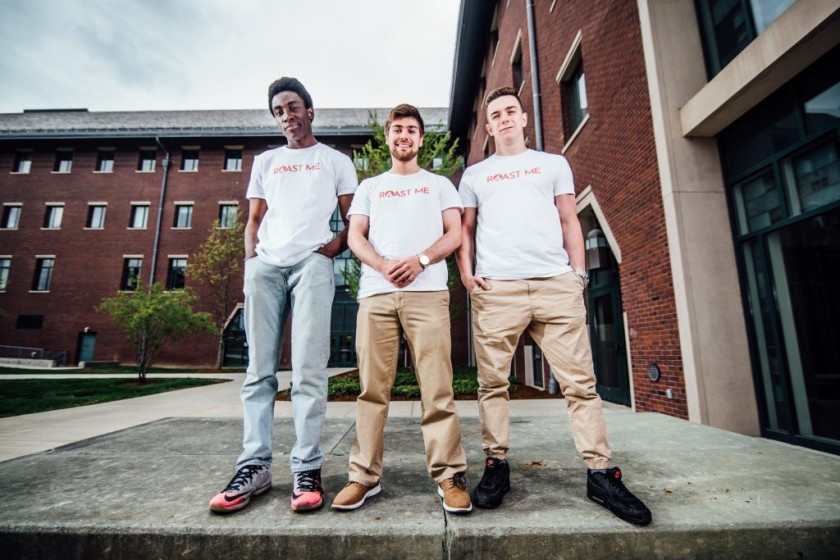 From left, Kwame “Ato” Eyiah, Ben Morneault and Chris Mueller, members of the Class of 2019 and creators of a new card game called “Roast Me.” (UConn School of Business photo/Nathan Oldham)

Three recent UConn alumni are on the verge of releasing their first entrepreneurial venture, a unique card game called Roast Me. The game brings a twist to good-natured comedic gibes among friends, with a gameplay style similar to “adult” card games that have become popular in recent years.

Geared toward the college demographic, Roast Me asks participants questions like:

“We want this game to bring people together and remind everyone that it’s alright to laugh at each other, and that it’s good to laugh at ourselves as often as possible,’’ said co-creator Chris Mueller.

Mueller’s business partners include fellow Class of 2019 graduates Ben Morneault and Kwame “Ato’’ Eyiah. Their game is for sale now at their website,  and will soon be available through Amazon.

Entrepreneurs Were Born At UConn

Morneault, Eyiah, and Mueller are all now employed at Loeb.nyc, a startup lab and early-stage private investor. But their entrepreneurial journey started at UConn.

“UConn’s support was crucial. Without it, there would be no Roast Me,’’ Morneault said. “None of us knew we wanted to be entrepreneurs when we came to UConn. Thanks to our classes, mentors, and entrepreneurial experiences on campus, we were empowered to take action on our ideas.’’

David Noble, a management professor and director of UConn’s Werth Institute for Entrepreneurship & Innovation, said he thinks the three alumni are well-equipped for success.

“These three students have taken the process of engagement and education to the max. They are the prototype versions of what we want to accomplish at UConn,’’ Noble said. “This is only their first product, and we expect to see much more of the Roast Me team over the years.’’

Morneault, Mueller, and Eyiah, who met through a combination of luck and circumstances, each bring something unique to the business team.

Morneault was inspired by his Dad, who coached him in sports and encouraged him to be tenacious in life. “Don’t let anyone tell you that you can’t do something,’’ his father, Bill, said.

Mueller, who, like Morneault, majored in business management with a concentration in entrepreneurship, said his father, Ben, and grandfather, Hans, were both independent artists with high-profile clients. He thinks his entrepreneurial streak came from them.

And, Eyiah, an economics major, is continuously inspired by music and brings comedic interaction to the team. His family is  known for familial, light-hearted ‘trash talking.’

The UConn experts who helped them become entrepreneurs – from faculty and staff to alumni and other business professionals with UConn ties—are too many to name, the Roast Me team said. But there were three pivotal experiences that they all shared.

Next, they developed “real world” experience under the guidance of UConn programs. Morneault worked with the School of Business’ startup incubator, Innovation Quest. The men also assisted UConn-affiliated fledgling medical businesses, including QRfertile and Encapsulate, through UConn’s Connecticut Center for Entrepreneurship & Innovation (CCEI). Those experiences led them to develop an entrepreneurial mindset, better perspective on funding, and a deeper appreciation for the intricacies of business creation.

They also benefited from the many business connections they made through UConn. Perhaps none was more significant than the chance to interview for summer internships at Loeb, where Rich Vogel ‘87 (BUS) is a founding partner.

They spent the summer after junior year working at Loeb as interns. Only a few days in, one of their Loeb advisers half-jokingly challenged the men to create a new game.

And although the name Roast Me stuck almost from the beginning, the game itself underwent many iterations over the subsequent months. When they returned to UConn as seniors, they entered and won UConn’s ‘Get Seeded’ competition. The $500 award allowed them to advance the game’s development.

The university also allowed the entrepreneurs to test their game with UConn students during the spring 2019 semester. Later they refined it with the help of professional comedian Jackie Evans. They engaged UConn alumna Olivia Crosby ’19 as the game’s graphic designer. And they completed all this while working full-time jobs.

“We believe that getting students involved in entrepreneurship early, even before they have an idea, is beneficial. We don’t build companies here. We build entrepreneurs,’’ Noble said. “Then, when they find an idea they like, they can chase after it. At first, they might work on someone else’s innovation or invention, then they have an internship, and then, when they come up with their own great idea, they are ready to go faster.’’

Eyiah, Mueller and Morneault are eagerly awaiting the game’s wide release, but that hasn’t stopped them from thinking about their next innovation. Eyiah said he and the team want to use their knowledge to create more businesses.

“Although these businesses will likely not be in the NSFW card-game market, we are confident that our next ‘play’ will continue to disrupt the digital media landscape,’’ he said.

For the Roast Me team, their venture doesn’t stop after the card game. They’re hoping to use the game as a launch pad for a multimedia company, creating a community around their content.