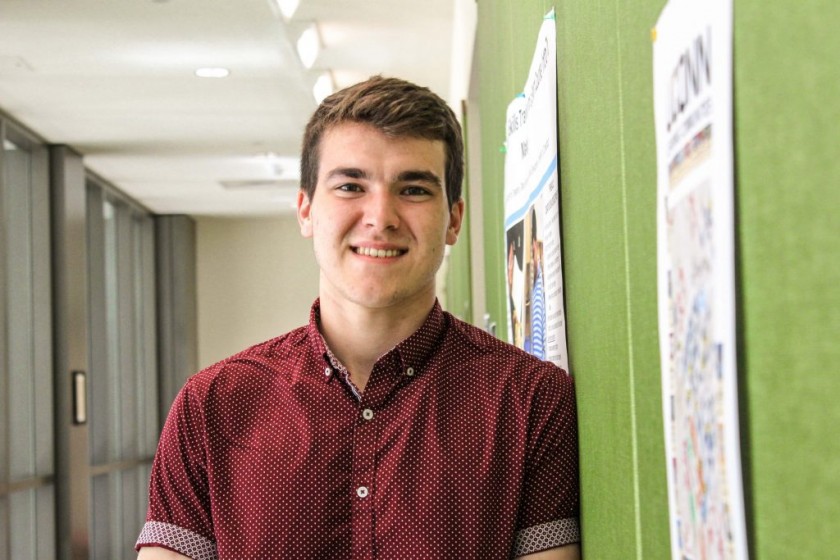 At Masuk High School in Monroe, Connecticut, Hornak joined the robotics program. Before moving from Legos to actual robots, Hornak says he had been considering becoming a computer programmer, but his focus quickly shifted.

“I decided to dip my toe into that and got completely sucked into it,” Hornak says. Hornak became the captain of Masuk High School Robotics and led his team to place in the top 50 in the world in 2018.

Hornak is now cultivating his interest in innovation through a variety of programs available to him at UConn.

As a freshman last year, Hornak was excited to discover the makerspace in the Learning Community Innovation Zone. The makerspace allows students like Hornak who want a hands-on experience to create and innovate using 3D printers, laser cutters, and a variety of other tools that can make anything from chairs to longboards.

“When you’re required to do a project for a class it’s not nearly as fun as when you’re doing it for yourself and it’s something you want to do,” Hornak says. “So, having an outlet like the makerspace is what really allowed me to go and be a little more creative on campus.”

Starting a business was never something I was curious about until I got here.— Mitchell Hornak

This year, Hornak is a maker specialist for the Learning Community Innovation Zone. Through this role, he is working to get a robotics kit for the makerspace.

“I’m hoping it will be here in a couple weeks so we can start making a little robot for people to drive around and build and tinker with,” Hornak says.

Last year, Hornak participated in HackUConn, an annual 24-hour competition in which teams are challenged to develop an innovative prototype. In another UConn entrepreneurship program, Hornak’s team won the Innovation Quest (iQ) award for their automated opioid dispenser designed to help prevent patients from overdosing.

Hornak was recognized for his dedication to new ideas when he was named a Werth Innovator at the end of last year and received a scholarship for his innovative work. Hornak’s responsibility is to promote innovation and entrepreneurship and he’s using this platform to advocate for the creation of a hackathon similar to HackUConn that is dedicated to robotics instead of prototypes.

“Mitch is a prime example of the talented student entrepreneurs at UConn that we have the privilege to work with,” says David Noble, director of the Peter J. Werth Institute for Entrepreneurship & Innovation. “All the success Mitch has had is directly related to his excitement to try new things, which is exactly the type of innovative spirit our experiential programming encourages. Entrepreneurs and innovators don’t let the unknown stop them.”

These experiences have led Hornak to reconsider his career path by bringing business into the picture and allowing him to see the possibilities of combining his passion for dynamics controls in robotics with private sector innovation.

“Starting a business was never something I was curious about until I got here and then after seeing HackUConn and iQ, it’s definitely a route I’d consider taking,” Hornak says.

Hornak says the programs and events he has participated in at UConn are valuable to any student interested in gaining valuable innovation and entrepreneurship skills.

“All these programs really provide great experience and talking points for future jobs and opportunities,” Hornak says. “I learned a lot about businesses I didn’t know about before.”

Students interested in learning more about opportunities for innovation at UConn can check out the Experience Innovation Expo on Monday, Oct. 21, in the Student Union Ballroom from 12 to 3 p.m., as well as the other Month of Discovery events happening this October.