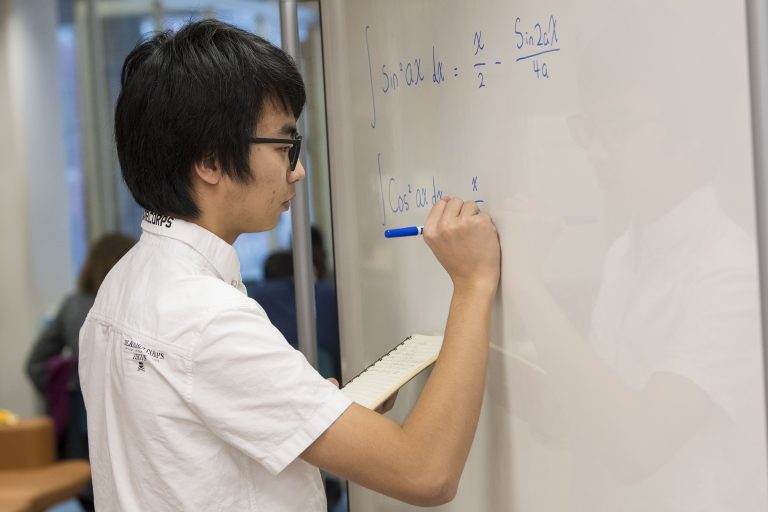 For Wei ‘Toby’ Xinhai, the road to UConn spanned nearly 8,000 miles, but the distance doesn’t faze him. While he may be separated from his family in Hong Kong, S.A.R. China by a full ocean, the dream of being a teacher has transcended any homesickness he has felt in Storrs.

Wei, a pre-teaching freshman in the Neag School of Education, who is working toward a career as a math educator in the school’s five-year Integrated Bachelor’s/Master’s Teacher Education Program, keeps his eye on his ultimate goal. That focus, he says, stems from the respect he has for the U.S. education system, which he says allows for a lot more creativity than education in his home country:

“In China, every level of education before university is operated like the elementary schools in the U.S., namely, our schedule is fixed and we are studying to conquer the standardized test,” he says, “whereas most American schools give students the freedom to pick the classes they enjoy after middle school.”

That freedom to explore culinary arts, for example, or to study media in the American education system was a determining factor in his choice to pursue teaching in the United States.

But the transition to an unfamiliar environment, culture, and country has not been easy, he says:

“So far, my life in college is okay, but I believe that it could get better. It’s very hard to make friends and find a sense of belonging at the moment. In huge lectures, the people who sit by you change, and we’re all so busy taking notes that there is barely time to socialize.”

Wei says he fills his time out of class attending academic clubs and taking part in events with his learning community, the Human Rights and Action Learning Community.

The Human Rights and Action Learning Community, which “engages participants through academic, experiential, and residential activities designed to enhance their understanding of social justice, diversity, and civic responsibility,” according to its website, engages in several projects and forums to gain a better understanding of active citizenship. Wei says the learning community has allowed him to learn more about the culture of the United States through the lens of human rights:

“Living in the human rights learning community is a big step toward getting to know America. I can see what is going on in America through the lens of human rights, and understand what is going on in this country as well as what China can do better. I believe the essence of America is being diverse, and joining the learning community is helping me to learn about diversity.”

English professor Tom Deans, the director of the learning community, says Wei is one of three international students currently living in the human rights-focused community. Deans says that in addition to group activities throughout the year, students also have the chance to partake in a First Year Experience class and fulfill 25 hours of community service each semester. Wei, he says, is one of the most involved students in the program:

“He’s been an active participant in the learning community. He has a warm personality – he’s inquisitive and quick to laughter. He often comes to events with a camera hanging around his neck, ready to capture the people and action.”

In addition to the human rights learning community and clubs experience, Wei says that every so often, he does get some time in with his family through Skype, which has helped ease his transition.

But in the end, Wei knows that he has found a second home here at UConn, which has an excellent academic reputation – as well as a reputation for well-made frozen treats:

“I choose UConn, because it was far away from cities and I can be still and stay focused – although I really want to go to New York every week for a nice musical on Broadway as well,” Wei says. “UConn also advertised itself as one of the top schools for education in the New England area. The school mascot is also a plus, as well as the reputation of the ice cream.”