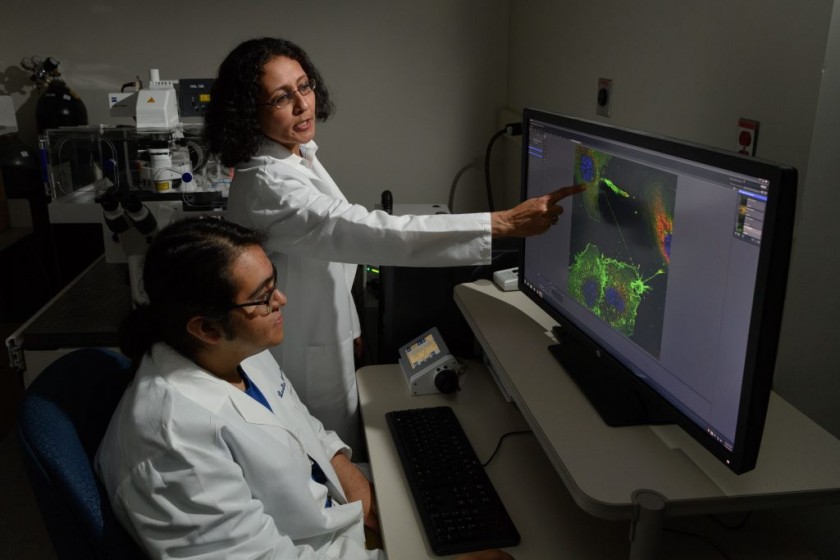 Growing up in Bogota, Colombia, Brian Aguilera ’19 (CLAS) always knew he would have to leave his family behind to achieve the future he wanted in science and biology. Hard as that would be, he knew that the United States and the University of Connecticut, with its emphasis on science-related research, were the right place for him.

This summer, Aguilera, a molecular and cell biology major and honors student, took the opportunity to take part in the new Health Research Program, which allows undergraduates interested in health and biomedical sciences to gain valuable hands-on experience working with researchers at UConn Health. Participants must commit three to nine hours per week during the academic year, and 360 hours during the summer months.

Aguilera was selected to work in the lab of assistant professor Mallika Ghosh in the Center for Vascular Biology at UConn Health, where he studied the protein enzyme CD13 and its effects on the formation of tunneling nanotubes (TNTs), a communication mechanism between cells under stress. TNTs have been linked to Parkinson’s disease and the aggressive spread of cancer cells. He is continuing the research this semester.

One of just 40 students taking part in the Health Research Program this summer, he was the only international student.

His background and future aspirations made him an ideal candidate to participate in the program, says Caroline McGuire, director of undergraduate research at UConn:

“For students like Brian, who are interested in health and considering the pursuit of various health and research career paths, the Health Research Program provides an invaluable opportunity to work under the mentorship of a faculty member at an academic health center and contribute to the research being pursued in that setting. Brian was selected by Dr. Mallika Ghosh from among many applicants for the opportunity to work with her on her research.”

Although Aguilera is thriving now, his journey to Storrs and his transition to living in a foreign country was challenging at first: “It was a little bit hard at first when I just got here, because I didn’t know anyone,” he says. “But most people I’ve met while at UConn, including faculty and staff, are always there to help you.”

In addition to acclimating to his new surroundings, he found it hard to be so far away from his parents, especially when he saw his classmates leave during breaks, or go home for the weekend:

”Being so far from home has many challenges as well,” he says. “I often just see my parents for a couple of weeks every year, but that has made me more independent and focused on my studies even more. Even though I haven’t seen my parents for over six months, it’s all worth it in the end because I know they support me unconditionally and are very proud of me.”

Aguilera blazed a strong path through high school, with his emphasis on academics and his lofty goals for himself. He was named class valedictorian. After earning his undergraduate degree at UConn, he plans to apply for the highly selective and intensive eight-year MD/Ph.D. program at UConn Health, which has graduated just 71 students since its inception in 1978.

Reflecting on his experiences in the Health Research Program, he says he is proud of the work he accomplished in a short amount of time: “I would say one of my proudest moments this summer has been learning all of the techniques that I read about in class, and actually using them to understand more about the role of CD13 in the formation of TNTs,” he says. “Also theorizing about the role of CD13 and other various proteins in TNT formation with Dr. Ghosh was literally the sort of thing I had wanted to do since I was a little child, and to finally have the knowledge and the opportunity to do it is very exciting.”

Yet, if not for the bold step he took to leave his family and come to UConn, he knows that none of this would have been possible: “I had always known I wanted to come to the U.S. to study because of all the opportunities for research and the work that I’m interested in doing in the future,” Aguilera says. “In Colombia, most universities don’t have the funds to do the kind of research that’s going on at U.S. universities and specifically at UConn.”