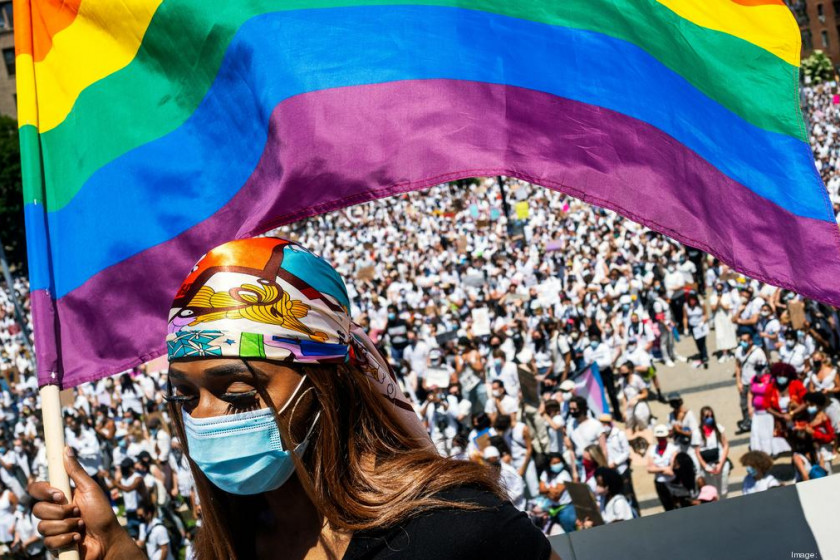 With the current job market being hypercompetitive, it can be difficult to not only secure a position but find a company whose values align with your own. It has become trendy for companies to include rainbows on their products during Pride Month each June in an effort to display their commitment to the LGBTQ+ community. But how can you find out if a company is truly a champion for LGBTQ+ Equality? The simple answer is consistency. Amy Elisa Jackson from Glassdoor states, “Whether that’s through public support, partnerships with LGBTQ organizations, policy support or a commitment to a safe and accepting workplace, it’s important to recognize what companies are truly advocating for LGBTQ rights, especially if you identify as LGBTQ and want to work for a company that is going to welcome and support you.”

Jackson also says, “In 2020, there are multiple companies, big and small, that champion LGBTQ equality hiring – and these places are hiring now! So whether you are an LGBTQ-identifying candidate or an ally that wants to work for an inclusive company, both in and out of the workplace, then you’ll want to send your resume to the following businesses:”

How they support LGBTQ Equality: “Visa has expressed support for the United Nations Standards for LGBTI, a best-practice guide for policies and practices for LGBTI employees and inclusive workplaces. This guide, produced by the United Nations Human Rights Office, outlines five Standards of Conduct to support the business community in tackling discrimination against lesbian, gay, bi, trans, and intersex (LGBTI) people. Visa has received a rating of 100 percent on the Human Rights Campaign Corporate Equality Index™ for five years in a row, earning recognition from the Human Rights Campaign Foundation™ as one of the “Best Places to Work for LGBTQ Equality”™.”

What employees say: “Encourages innovation, best IT techs ever, great benefits and compensation, promotes diversity, gives back to the community. CEO is engaged with the people, customers, and the market. Great place to work.” – Current Employee

How they support LGBTQ Equality: Since 2004, Charles Schwab has received a 100% rating on the Human Rights Campaign’s Corporate Equality Index, which recognizes companies based on LGBT equality. Cultivating a work environment that celebrates diversity and champions inclusion benefits everyone.

What employees say: “Really great people many of whom have made Schwab a career of 15, 20 and even 30 years. Strong company with great senior leadership. There’s a vision, plan and execution to drive the company forward. Interesting and challenging work with a clear understanding of how it helps the company and its customers.” – Former Employee

How they support LGBTQ Equality: Various partnerships with LGBTI organizations that protect workers against employment discrimination and the company often promotes inclusion in marketing campaigns. “The Gayglers is comprised of LGBT Googlers and their allies,” says the Google Diversity site. “The group not only leads the way in celebrating Pride around the world but also informs programs and policies so that Google remains a workplace that works for everyone.”

How they support LGBTQ Equality: Community involvement with co-workers, employee-support groups, promoting local advocacy.  Their motto is “Be your authentic self.” They offer professional development, inclusive policies, recruitment and retention guidelines, equal benefits as well as a global Ally program with more than 24,000 members. Follow #PrideAtAccenture on social to check out their work.

How they support LGBTQ Equality: The company is constantly working to hire more diverse workers with half their new hires being from underrepresented groups. The company has been rated by HRC as a “Best Place to Work for LGBTQ Equality” for +15 consecutive years. The company uses their voice to advocate for LGBTQ rights and freedom around the world and has partnered with major organizations on projects, such as GLSEN, PFLAG, The Trevor Project, and ILGA.

How they support LGBTQ Equality:  The company recognizes Inclusivity as a core belief and has partnered with organizations such as National Gay & Lesbian Chamber of Commerce, Gay, Lesbian & Straight Education Network to support legal briefs and on other projects. The company published a Pride manifesto to showcase its year-round commitment to creating an inclusive culture. The company signed the Equality Act and is a platinum partner with HRC.

What employees say:  “The people are all very nice, and it’s a very clean, safe, and upstanding place to work.” – Former Employee

This list features a few companies, but the Corporate Equality Index, a national benchmarking tool on corporate policies, practices, and benefits pertinent to lesbian, gay, bisexual, transgender, and queer employees, is a great place to gather more information about LGBTQ workplace inclusion.