I Thought I Wanted to Be a Lawyer, But I’m Happier as a Social Worker 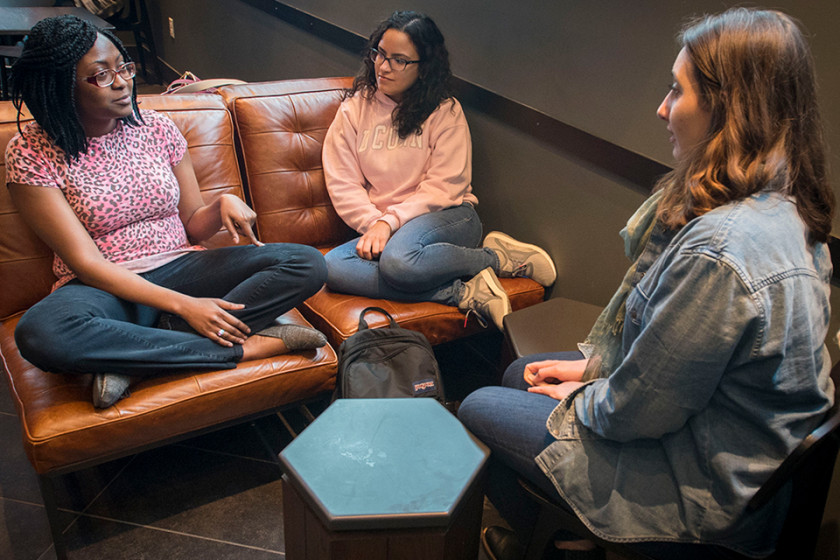 I Thought I Wanted to Be a Lawyer, But I’m Happier as a Social Worker was originally published on The Muse, a great place to research companies and careers. Click here to search for great jobs and companies near you.

“I love my job. I think, at this point in my life, it’s the perfect job for me,” my colleague Sara Yzaguirre shared with me as we sat in her office. “I’ve been here almost three years, and I still actually love going to work and doing what I do.”

There you have it, folks. The few sentences most people wish they could truthfully say.

But make no mistake—Yzaguirre didn’t simply “luck out” or “happen upon” her current position as an advocate for college students who are also survivors of sexual assault, relationship violence, and stalking. “It was a process getting there,” she said more than a few times during the course of our conversation.

You see, when Yzaguirre began college, she planned on becoming a lawyer. But a few years into her studies, she started feeling like pre-law wasn’t quite the right fit.

But she also thought it was too late to change majors and after graduating, she accepted a two-year position at a law firm to gain more experience before actually applying to law school. She lasted only six months before quitting.

Feeling lost and like she was “failing as an adult,” she decided to spend some time in the restaurant industry to pay the bills and figure out her next steps. Through connections from one restaurant, she found a gig at an educational startup, where she wrote, edited, and designed online curricula for eight years.

During those eight years, Yzaguirre dedicated a lot of time to volunteering at local women’s shelter, since she’d always had a strong interest in violence prevention. This experience also opened her eyes to the world of trauma recovery, which she soon learned she wanted to become more involved in.

Deciding to follow this passion and change careers led Yzaguirre to pursue a master’s degree in social work that would allow her to explore this field in a deeper, more meaningful way. After obtaining her degree and spending a few years in the clinical world, Yzaguirre took a position at a university in the Washington, DC area, and that’s how our paths crossed!

To find out more about how Yzaguirre went from being a paralegal to a coordinator for victim advocacy services, keep reading.

Can You Explain Why You Decided to Make a Career Switch?

I’d often be pretty exhausted because I was working hard at my full-time job and at a few volunteer jobs. At a certain point, I realized I wanted to turn the volunteer work into my full-time career.

While I debated changing careers for a long time, one of the most catalyzing events was a personal tragedy in my family. It highlighted for me in one clear moment that nothing is promised, life is unpredictable, and it’s up to each of us to live the life that we want to live. It made me think, “If you’re going to do this, do it now.”

Why Did You Choose to Pursue Social Work Specifically?

It was a process to figure out which direction was the way to go. Once I figured out what I liked doing, I asked people in those fields how they got there—what degree did they have? What did they study? How’d they get to do this full-time? Many people working in the shelters had a background in social work or counseling.

Social work is a great field for me because it addresses social justice and community, which speaks to my educational background in political science and sociology. But it also provides ample opportunities for one-on-one interactions, which speaks to my interest in trauma and recovery.

What Was the Most Stressful Part of Your Transition?

The money. Financially, I had a lot of stress—taking out loans, figuring out how to make them last, and accepting that it’ll take over 10 years to pay them off. I even had to move because I could no longer afford where I was living.

I still make less now than I did before I went to grad school. But there’s nothing better than enjoying the job that you get paid to do.

What’s the Best Part of Your Job Now?

Providing people with information that helps them make the best decisions about their recovery is extremely gratifying. And when students who’ve graduated send a note or stop by, and you see that they’re doing well—those are some of my happiest moments.

It’s the best thing in the world to help people be happy, to help them get back to being themselves. It’s such a privilege, and it’s the most wonderful thing to get to be a part of.

Also, I really like being in such a collaborative environment with people who also care about violence prevention and student wellness. It helps spread the message across the entire campus.
Do You Have Any Career Advice for Wannabe Career Changers?

If you listen to what your curiosity’s telling you, you’ll eventually find that there’s probably a job out there focusing on that. If you can, volunteer some of your time and start talking to the people who’re doing it. See what their path was, how they got there, what they studied, and what they recommend. Then, do your research and figure out how to make that switch as economical as possible.