Interested in a Career in Sports Media? Advice from a Recent Communications Alum! 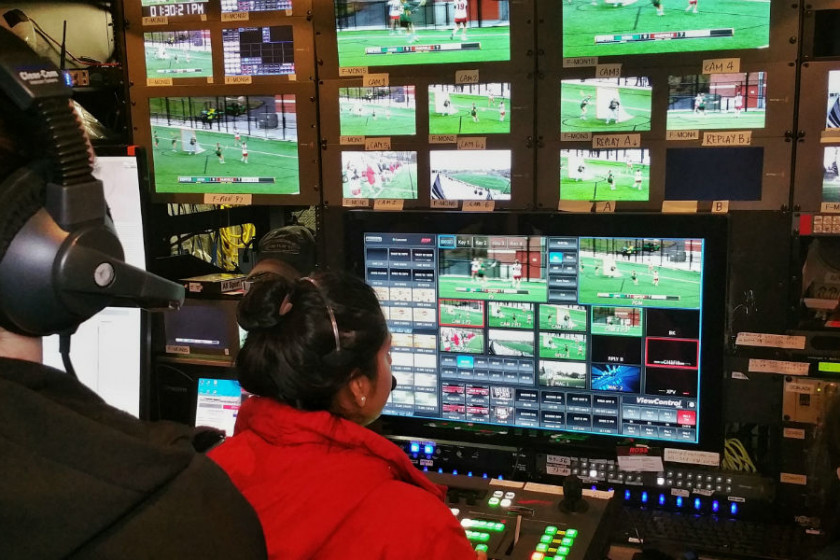 I interviewed a recent UConn graduate of the Communications department who works in production in the Olympics department at NBC Sports, America’s Olympic Network. She and I met to discuss her career path, skills she has learned along the way, and advice she has for students interested in the media industry.

Career Path & Lessons Along the Way

When asked how she determined what she wanted to do once she left UConn, she said, “I’ve always known I wanted to work in media whether it was sports or music.” As an immigrant and first-generation college student, she felt the pressure to be an engineer or a doctor, but once she gained experience in the medical field, she quickly realized it was not for her. She asked a colleague for advice who told her to “choose something you’re most curious about.” With this advice in tow, she took a year off to plan her next step. She knew she loved sports and the Olympics, so she decided that she needed to pursue a career in the sports world.

Her first position at NBC Sports was as a Runner where she handled accommodations for the crew, did coffee runs, and assisted with guest transportation. She sat in production trailers and had the opportunity to observe how everything played out during the shows. She says she, “quickly learned that nothing is going to go according to plan.” During this experience, she learned the importance of adapting quickly to changes and remaining flexible. This skill came in handy when the Summer 2020 Olympics, set to occur in Tokyo, Japan, was rescheduled due to the current global pandemic. She was excited to assist with the production of the games in Tokyo but understood that sometimes the unexpected occurs. Overall, her advice for anyone interested in working in the media industry is to learn to adjust to change and adapt to it all.

She expressed that what she loves about operations is that no two days are the same. There are so many moving parts at any given time so to conceptualize the typical day is difficult. She works on several projects at a time and loves having her hands in a lot of different things. Merchandise, venue planning, and visiting Chicago amongst other cities are a few examples of how each day may vary.

When asked what to consider when accepting a position, she recommended individuals, “consider the work environment, benefits and perks, and your personal circumstances.” Since she had been working at NBC Sports for some time, she informally spoke to people in the Olympics department about the work culture. Everyone said great things which confirmed that the environment was right for her. She explained that as a huge sports fan, there are many benefits and perks to working at a very large media company focused on sports coverage. This may include free or discounted tickets as well as cool company social activities.

Lastly, she recommends that you consider your personal circumstances. For her, location, traveling, and once in a lifetime experiences were major factors when considering if she would accept the position. She knew she wanted a job that required traveling while remaining within proximity to her home. She says, “my job in production is a dream come true because I love sports and I get to cover the Olympics.” She suggests you contemplate what you want to get out of the experience to ensure that it aligns with your goals and interests. She said, “I was making coffee and running errands and now I have my dream job. There’s room to grow at NBC, but you have to start somewhere.”

Advice for Current Students Interested in a Career in Media

She says that the first step is getting your foot in the door and the second step is working hard and meeting as many people as possible. The media industry is big, but not that big so be fair in how you treat others. She says, “you never know who knows who so make connections and influence the influencer.” She also said, “In the media industry, all you really have is your name so it’s really important to meet people. Anytime they provided a work opportunity or a space to meet new people, I said yes.” She never turned down an opportunity and believes that maxim benefited her success. The alumnus’ final piece of advice is “do what’s best for you. As long as you’re happy, that’s all that matters.”