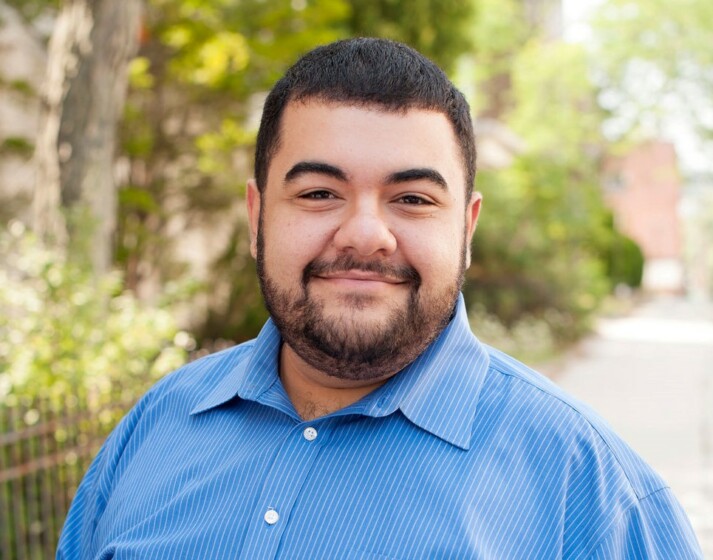 Bilal Tajildeen graduated in 2014 and majored in English.  He attended the Waterbury campus for his first two years, and completed his degree at Storrs. A lifelong Waterbury, CT resident, Bilal joined the Connecticut Council for Philanthropy team in 2020 as the manager of membership and culture.

Prior to joining the Council, Bilal worked as a program officer at Connecticut Community Foundation in Waterbury, where his major grantmaking portfolios included community organizing, eldercare, and youth development. He also assisted In the Foundation’s community leadership efforts including staffing the Pride Fund (grantmaking by and for the LGBTQ community), serving on both the Waterbury Bridge to Success community council and the equity think tank, and as a member of the Supporting Organizing Work CT (SOW CT) steering committee.

How did you choose your major, program, and/or minor?

Since some time in high school, I had always known I wanted to be an English major. When I started undergrad at UConn Waterbury, the English major was one of the five majors you could complete on campus without having to transfer to the main campus. While I eventually did transfer to Storrs for my junior and senior years, I benefited greatly from having so many dedicated and on-campus English professors teaching courses. The course that really cemented my desire to stay in the major was English 2600, a course on literary criticism that all English majors must take, taught by Dr. Ellen Carillo. Prior to this class, I had assumed that being an English major was writing papers about what color the curtains were and how that related to a character’s struggle. But in ENG 2600, Dr. Carillo walked us through the Bedford Glossary of Critical and Literary Terms, a work I have often gone back to reference in the decade since I highlighted my way through it. When it finally clicked that theory and criticism were ways to expand the analyses of a text to contribute to a much broader— and yet more defined— conversation, I knew the English major was the way to go.

How did you find out about your position?

It really is a bit of a journey! Currently, I am the manager of membership and culture at the Connecticut Council for Philanthropy, the state’s association of grantmakers committed to promoting and supporting effective philanthropy for the public good. Prior to joining the Council, I was a program officer at Connecticut Community Foundation, headquartered in Waterbury, CT. The Foundation was a member of the Council, so I knew when the position posted. But prior to joining the philanthropic sector, I was a grant writer for a nonprofit theater company, also in Waterbury. Utilizing my skills in written communication, storytelling, and finding credible sources of information— all of which I gained through my coursework in the major— I was successful in applying to foundations and cultivating donors. And the way I knew about this particular theater company was through DRAM 1101: Introduction to Theater, in which one of our assignments was to see a local play and write a review of it. The Waterbury regional campus really did set me up in so many ways that have since become apparent to me.

What experiences during your time at UConn contributed to your current success?

Most of the work I have done since graduating from UConn has been in what I consider to be the intellectual trade. It is all based in ideas and theory. Of course, there are deliverables (reports, grants, copy) but the major emphasis has always been on imagining how ideas, programs, and communities fit together. While at UConn Storrs, I took two independent studies, one in the English department and one in the women, gender, and sexuality studies program. Both programs focused on queer theory/literature/history. Being able to explore and personalize an academic study absolutely contributed to my current success. Independent studies create mentorship opportunities between professors and students, allow students to invest their own research interests, and provide a solid foundation upon which one can build expertise.

What groups, organizations, or other resources at UConn contributed to your career success?

While at UConn Waterbury, Jim Long, the director of student activities, regularly went out of his way to ensure that students felt connected. As a commuter campus, it could sometimes feel as though we couldn’t spend a lot of time there; most students had a part- or even full-time jobs on top of home and family responsibilities. There were certainly times when I had to cover a shift in between classes. But the way the campus structured its classes with a free period in the middle of the day allowed so many students the chance to create meaningful memories with their peers. This instilled within me a deep admiration for supporting and creating spaces of joy and connectedness in my work.

At UConn Storrs, I spent a lot of time at the Rainbow Center in the student union. Not only was this a place to relax and catch up with friends, but it was also a place where I could find support and guidance from my peers. Fleurette King, the director while I was there, had a huge emphasis on providing programming and learning opportunities for students, whether it be a lecture, a movie night, or a drag show. The Rainbow Center is where I felt true belonging and a sense of community.

What advice would you give to current UConn students who are looking to follow the same career path?

I am not so sure I have “followed a path” so much as I have stumbled vaguely forward. In truth, so much of the success I have had has not been through myself alone but through caring and thoughtful guides. I am a person who is committed to his community—whether that is my Waterbury community or my queer community—and the leaders in those communities have been the ones to help propel me forward. My advice, particularly for my fellow English majors, would be this—find your people. They will be there to boost you up and you, in turn, will boost up the next group!