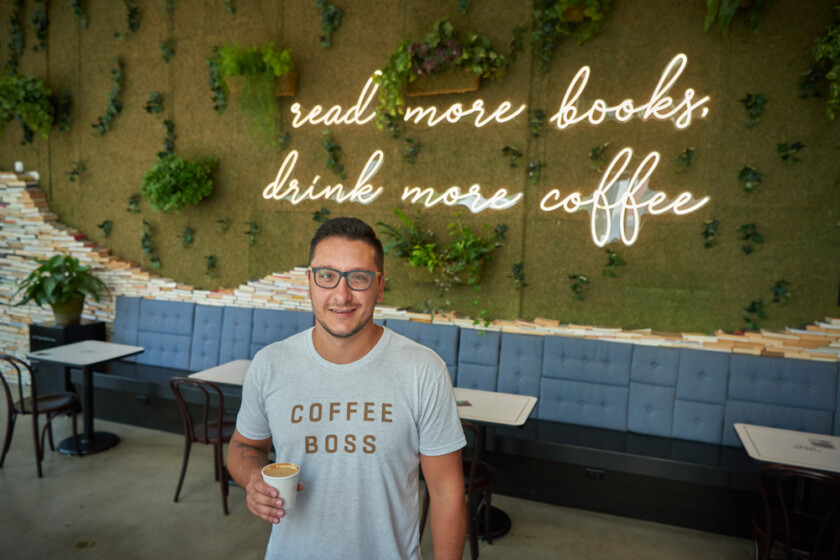 Breno Donatti earned a bachelor’s degree in General Studies in May 2014. As a first-generation immigrant born in Brazil, Breno encountered some challenges when he moved to the United States without knowing how to speak English. Prior to founding Winfield Street Coffee in 2015, Breno worked in some renowned restaurants and pizzerias in New York. Hear Breno’s story and how he took advantage of the resources of the UConn Stamford campus to get where he is today.

Ayane Reis: Could you share some of your career stories with us? How did you get started as a business owner/ entrepreneur?

Breno Donatti: At 18, I left Brazil without speaking English and moved to the US to study and work. It was challenging because I had no family in the United States. However, I was enchanted by the culture and decided to stay because, as an entrepreneur, the opportunities and possibilities were much greater for me here. I studied for two years at Norwalk Community College and got my associate’s degree in Restaurant Management, then transferred to UConn, where I graduated with a General Studies degree in 2014. During the period I was studying I also worked full time between a pizzeria and restaurants. Despite being very challenging, working while also studying was very important to my career because it helped speed up the progress of creating my own company. The first business I opened was a restaurant called Bistro 7 when I was still studying at UConn. Three years later I decided to sell it and went back to work at some renowned restaurants in New York. When my wife got pregnant, I decided to go back to being an entrepreneur and that’s when I bought a small space called Winfield Deli in Norwalk. In 2015, we opened Winfield Street Coffee and six months later we were already expanding. By the end of this year, we will have eight locations spread across Connecticut and New York.

AR: Could you tell us about Winfield Street Coffee? What would you like the community to know about your shop?

BD: When I decided to open Winfield, I wanted to focus on producing great coffee and serving the community that we are a part of. One of the ways we have been doing that started last summer when we reopened after a few weeks being closed due to covid. The Giving Back program, with all locations, consists of donating meals to help households struggling through the economic hardship caused by the pandemic. By the end of 2020, we had donated over 6,000 meals. We are now committed to donating 21,000 meals by the end of 2021. The program is very important not only for me but for everyone who works with me; we are very proud to be able to donate enough food for some organizations in the Stamford area. I believe it’s important for the business to have a mission and know that you are doing something more.

AR: When you were at UConn, as a first-generation immigrant, what resources and services contributed to your success?

BD: Although I did not have a lot of time, between working, having my own business, and studying, I used a lot of resources granted to me as a student. I was able to be a member of some clubs during my time at UConn and being a part of the community was important to me because it gave me a sense of belonging. The Professors I had also played a big part in my college experience; they often served as support during times when I had a lot on my plate. Nowadays, even after leaving college and opening the company, I still stay in touch with UConn by hiring several UConn students.

AR: What would you say are the essential skills and professional qualities for an emerging entrepreneur?

BD: Number one is Hustle. You need to be a dedicated person, but on top of that, you need to always make an effort. Of course, you can’t do everything all the time but it’s important to try your hardest and go the extra mile. It is also important to take care of your mental health and know your limits. Another thing, being a resourceful person is very important nowadays. Try to look for solutions when an issue or problem arises and always be a curious person who keeps seeking for answers. We never know enough.

AR: What experiences during college helped to prepare to be a business owner?

BD: Undoubtedly, UConn was great for me, it played an important part in my career, and certainly helped me a lot in the aspects of organization and planning. However, on a daily basis, you have to learn by working. It’s different and for me it was essential. Specially working in places that are good and traditional, I ended up learning to follow a standard and incorporated it in my own business. Between working and studying, it was essential to know how to balance my responsibilities and I learned a lot during that time.

AR: What advice do you have for current college students who are interested in starting their own businesses?

BD: I like to think that if an 18-year-old boy who couldn’t speak English when arrived in the US managed to set up a company and is now able to provide a decent living for his family, anyone can do that. Of course, the path is crooked and challenging all the time, but if you persist, opportunities will arise. Turn off your TV and start talking to real people that have done it, start watching them. Our generation is the generation of information, and we can gain a lot by watching others instead of just reading charts or articles. Also, find a person who you like and are inspired by and work for free. Don’t be afraid to take on unpaid work for a few months. I did that too and I learned a lot; it was a wonderful learning experience.