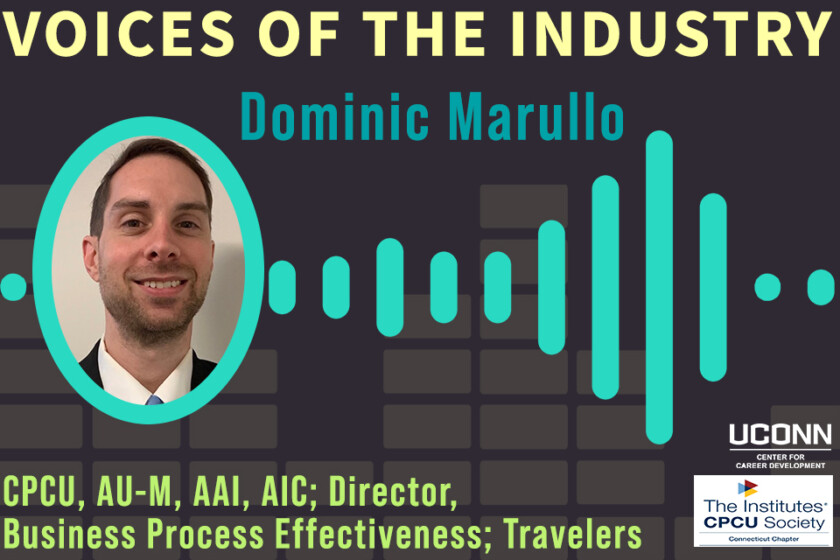 Dominic Marullo is a director on the Business Process Effectiveness team at Travelers Insurance and has been in the insurance industry for over twenty years. Although graduating college with a degree in history, Dominic says he “fell into the industry, as many of us do”. He started his career in insurance as an account manager and eventually moved into commercial underwriting. He makes note of the fact that during his undergraduate study of history, he often looked at various sources to form an argument or opinion, which is similar to the way he performs analyses in the insurance industry.

Currently, Dominic’s Business Process Effectiveness team at Travelers is responsible for finding improvements that can be made in the field, and more importantly, implementing those necessary improvements to the underwriting department. He states that the people he works with and the meaningful relationships he has made throughout his career are what really motivates him. “We laugh together, we cry together, we’re like family”. He values insurance so much because of the fact that it is “truly a relationship industry.”

Another component of insurance that motivates Dominic in his work is that “The business of insurance is about helping people”. He takes pride in the fact that the work he and his company does is assisting people and business in avoiding financial disaster. In addition, Dominic enjoys going through and analyzing insurance policies. He calls the interconnectedness of different insurance policies “an orchestra” because of the fact that together, they create the full scope of coverage for a business or individual.

Throughout his career, Dominic has earned several designations and certifications. He is a CPCU, Associate in Insurance Services, Associate in Commercial Underwriting Management, Associate in General Insurance, Accredited Advisor in Insurance, Associate in Claims, and a Senior Professional Public Adjuster. While gaining these certifications, Dominic says he liked going through the materials, adding to his knowledge, and the feelings of accomplishment he felt after passing the exams. In addition, receiving designations in areas that don’t directly correlate to the work Dominic does has helped him better understand other areas of insurance. Dominic encourages college students to pursue a career in insurance and take into account that insurance has many more roles besides the traditional ones that people tend to think of. He states that although you might come into an insurance company with one role, “There are thousands of opportunities to do something else in insurance”. In his experience, Dominic says that people who tend to be successful in insurance have a sense of humor, can build relationships, are organized, and lastly, are a little quirky. He encourages people with these characteristics to take a shot at the insurance industry.