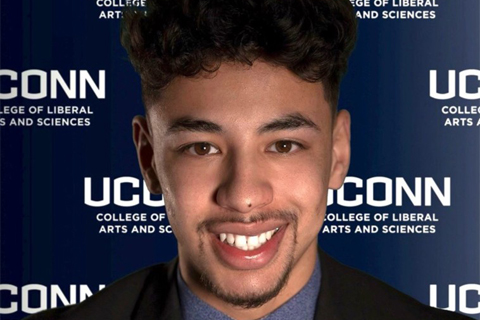 Nathan is a UConn senior at the Storrs campus, double majoring in Political Science and Philosophy and enrolled in the Department of Public Policy’s Fast Track Masters in Public Administration (MPA) program.  He has interned with the Connecticut Lieutenant Governor’s Office, worked with the 2020 U.S. Census, and is the founder and co-director of the UConn chapter of Camp Kesem, an organization supporting children whose parents either have or had cancer.

Speak on growing up with immigrant parents from Puerto Rico and Colombia. How did your upbringing affect you and your journey to UConn?

I grew up in Willimantic, CT, a community full of families who immigrated from Latin America. Being brought up with Latino culture taught me to put family first, and being raised by immigrants taught me that I had to work harder than non-immigrants in order to get the result that I desired. These are things that parents instilled in me from a young age. I knew that they were speaking from experience as they were both the first in their respective families to finish college.

Coming to UConn, the racial and cultural demographics were an absolute shock to me. I was used to a much more diverse high school and Spanish being spoken almost as much as English. As a white passing Latino, I wasn’t necessarily treated any differently, but I still felt largely like an outsider.

Much of your work has been centered on community building, especially in your hometown, Willimantic. With its sizable Hispanic population, speak on how your own Hispanic identity has motivated you to become a community leader.

I was heavily motivated to take a leading role in my community when I saw how other towns in the rest of the state slandered and belittled our community. Especially in high school, I felt as though Windham High School sports always got dirty looks from other teams, and our whole community was looked down upon by other towns. The whole “heroin town” reputation we’d garnered from the late 90s and early 2000s was hard to shake even as our small city continued to improve as a place to live. Other names like “immigrant town”, “welfare town” and “crime town” were also commonly heard.  I was not naive enough to ignore the racial aspect of the slander: the majority White towns looking down on our majority Latino community.

This gave me a chip on my shoulder from a young age. I always wanted to show them what our community could do, and what I, as someone who spent my entire pre-college academic journey in Windham Public Schools, could do. I saw politics as a way of challenging the status quo and improving my community around me. Internship experience with my town hall, working with my state rep. and with the office of the Lt. Governor helped develop the professional skills that allowed me to advocate for certain causes. I also expanded my network through these experiences which has allowed me to know who I could reach out to for different initiatives I was working on.

What are the most important transferable skills you have learned from your work and internship experiences?

My biggest takeaway from my time with the United States Census Bureau was interpersonal communication and how to talk to constituents. Furthermore, I learned the skill of treating everyone with the utmost respect and being an approachable professional.

From my time at the Lt. Governor’s Office, I learned time management, Microsoft Excel, and Word at a high level. I also learned how to write short and concise documents and citations at that same high standard.

At Camp Kesem, I learned how to build something from the bottom and be an entrepreneur. I managed a big team through a large scale project with many moving parts. It taught me how to get college kids with a lot already on their plates to care about something which was purely conceptual to them at that point, enough to devote time out of their lives to making that concept a reality. This experience taught me how to think on my toes and establish good professional relationships with my peers.

Have you overcome academic, career preparation, or job search obstacles during your time at UConn thus far? How?

My first semester at UConn was academically shambolic. I understand that everyone says that, but mine was especially bad. I got a 1.8 GPA my first semester. More importantly, I was in a really bad place mentally. I took the time over winter break to forgive myself while delving into the reasons why I did so badly. While I did have some very tangible obstacles that needed to be addressed (commuting without a car, depression,  etc.), I knew that I was capable of much more and that I really hadn’t cared enough my first semester. Resources like professor office hours and the UConn Connects program were also helpful in getting me back on track (shout out to my amazing mentor Karen Skudlarek!)

I’m proud to announce that over the past few semesters I’ve been named a New England Scholar, received my first 4.0, been inducted into Pi Sigma Alpha (the country’s most prominent Political Science Honor Society), and been accepted into UConn’s Fast Track Masters in Public Administration program.

Please share what groups, organizations, or other resources at UConn have contributed to your success and how.

The group that most contributed to my success was the one I brought to UConn: Camp Kesem. Camp Kesem is a national non-profit organization run by college students at around 150 college campuses that provides children who have parents with cancer a free week of summer camp as well as continued mentorship and support throughout the year.

Bringing a chapter to UConn with the help of some great friends and my fellow Huskies via Kesem’s national voting campaign was an exhilarating experience. The real growth, however, came from being one of UConn’s first ever Co-Directors for Camp Kesem and leading us into a tumultuous school year with the COVID-19 pandemic as a formidable obstacle. Navigating the unique challenges posed by this past year have allowed me to grow as both an individual and a leader.

Being a former camper myself and knowing the tremendous impact that Kesem has had in my life through my mother’s illness and beyond, I feel like things have come full circle. It feels amazing to pay it forward just like the great counselors at the chapter I attended did for me. The passion said counselors exhibited towards myself and others made me feel as though I owed it to my community to do the same.

What final advice would you give to other current UConn students?