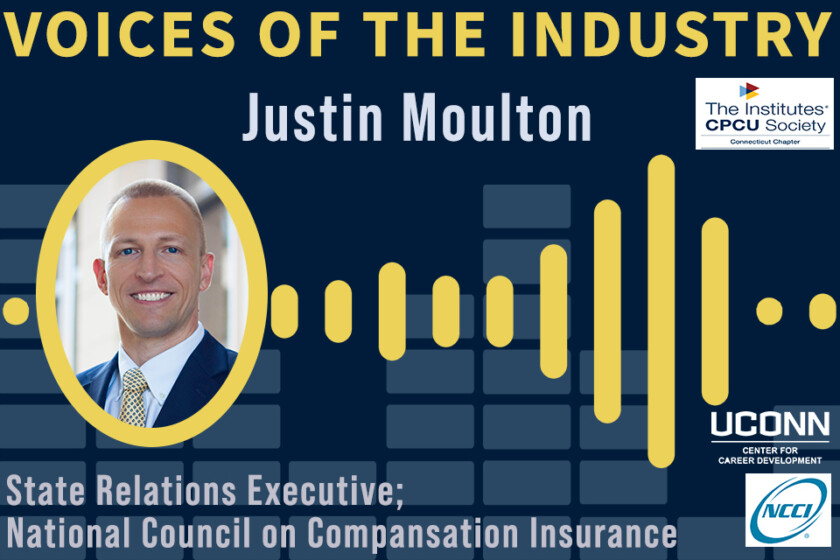 Justin Moulton is the New England State Relations Executive at the National Council on Compensation Insurance (NCCI). He has been in the insurance industry for the past twenty-three years, and admits that during his undergraduate experience, he did not have “an understanding or an appreciation for the opportunities” that are in the insurance industry. He began his career in the industry as a finance intern during the summer before his senior year of college, and was hired on full-time following his graduation. During his time working in insurance so far, Justin has held nine different job positions, giving him a lot of different experiences and opportunities.

Justin has worked for both large corporations and startup companies. From an early age, he has had an interest in law enforcement, and was able to get a job as a Fraud Investigator for Travelers Insurance. He then moved on to a role that allowed him to manage relationships between regulators, other insurance carriers, etc. He enjoyed being able to gain entrepreneurial experience and skills throughout these different positions. About fifteen years into his career, Justin found what he enjoyed must, “being able to manage people.”

In his current role as a State Relations Executive with NCCI, Justin is utilizing the many different skills and experiences he’s had throughout his diverse career in the industry. He especially enjoys being able to connect with regulators and legislators. In addition, his role involves him “helping to inform the industry”. Because of the research and data collection that he and his company do, he is able to share that knowledge across multiple corporations and keep people updated on the current issues of worker’s compensation. He sums up his career as a “fascinating journey”.

Justin is most motivated by the purpose of the work he does. By dealing primarily with worker’s compensation, he finds value in helping injured workers get back to work. “On a more personal note”, he says, “I think it’s really the people that I get to work with.” Justin enjoys working with not only his employees at NCCI, but also the worker’s comp stakeholders across the New England region that he has the opportunity to meet. Lastly, Justin loves the variety in his role. He gets to see how current trends in the economy and elsewhere effect his work, making it an ever-changing environment.

The insurance industry allows Justin to help people “in their time of need”. Something that resonates with him and relates to his long-time experience as a volunteer firefighter and EMT. In terms of insurance, he takes pride in “helping to make that system work”. Overall, Justin likes the fact that insurance is a “close-knit community”. He enjoys connecting with people and hearing their diverse perspectives.

Justin says there are so many opportunities for college students in the field of insurance. He talks about the “almost endless list” of things that you can bring your skills to in the insurance industry, emphasizing that there is a place for almost everyone. He concludes on the importance of the product of insurance in allowing people to take risks. Lastly, he encourages all students to explore this type of career and the many different opportunities that it brings.