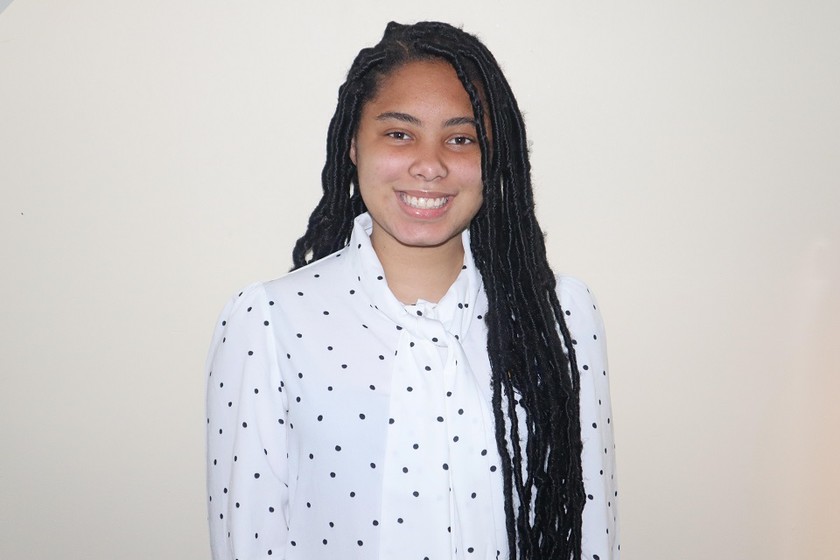 Amayia Cordova is a senior at the University of Connecticut double majoring in Mathematics and an Individualized Major in Healthcare Analysis. She has served as a Financial Planning and Analysis Intern for Yale University and a Group Benefits Claims Intern for The Hartford Financial Services, Inc. At UConn, she is the current president of the Nu Mu Chapter of Sigma Gamma Rho Sorority, Inc. and is involved in many other organizations.

What experiences have inspired you to pursue a career in the insurance industry?

Insurance is a word that I have repeatedly heard from my mother. My heart stopped twice, I had a pacemaker and many surgeries that sometimes we weren’t sure if insurance would cover. I felt as though people were afraid of this word and I wanted to understand it better. Therefore, for my own selfish reasons and curiosity, as well as wanting a career to help people, I decided to pursue a career in the insurance industry.

What skills have your internships with Yale University and The Hartford given you?

At my Yale internship, I got to show off my leadership skills and create my own projects at a professional level. Additionally, I gained the skills to communicate data I was working with clearly and concisely. At The Hartford, I was in more of an intern team that focused on collaboration for my projects. An important skill I utilized the most was planning/prioritizing since I led several team meetings to communicate goals, manage my team workload, and enhance company culture.

Before I pursued my Individualized Major, I was at a crossroads because I had a career goal of being an Actuary in mind, but I no longer wanted to pursue the avenue of Actuarial Science. I was talking to a friend—later to be a sorority sister—about going to the undecided office but she told me to visit the individualized office first, since I was already in the first semester of my junior year. On the fourth floor of Rowe, I met with Michael Cunningham and Monica Vanbeusekom who saw my passion and interest for healthcare and helped me formulate my own major. This was around the same time I had watched Zoey (Yara Shahidi) from the TV show Grown-ish, who created her own major “Sociology of Fashion,” so it felt like fate at that moment because I had to take those same steps.

With involvement in the Nu Mu Chapter of Sigma Gamma Rho Sorority Inc, the National Council of Negro Women, and the Women in Science, Technology, Engineering and Mathematics (WiSTEM), how have these experiences supported you as a woman of color at UConn, and how can they support others?

As a woman of color, the first club I had gotten involved with was the National Council of Negro Women (NCNW), which meets in the African American Cultural Center, (AACC), because they hosted meaningful events in a room full of other women of color. They did community service and recognition awards ceremonies to let women of color know that they are marvels and are acknowledged. The Women in Science, Technology, Engineering, and Mathematics (WiSTEM) involvement was derived from seeking out a mentor in Mathematics. As a woman of color in STEM, sometimes I am the only woman or person of color in the classroom and I felt like I did not belong. WiSTEM helped me navigate those feelings and empowered me with guidance. I joined the Nu Mu Chapter of Sigma Gamma Rho Sorority Inc. in Fall 2020, and it was one of the best choices I could have made in my undergraduate career. Before I was a member, I was struggling in some classes and they did study nights with me. One of the members guided me through the process of creating my individualized major. The principles of sisterhood, scholarship, and service were shown to me way before I was a member.

What are your plans after graduation?

After graduation, I will be working Full-Time as a Group Benefits Underwriter at The Hartford Financial Services, Inc.

What final advice would you give to other current UConn students?

Get involved at UConn. In all honesty, joining clubs and organizations that aligned with my values and building a safe space are the only things that kept me sane, especially as a first-generation student. Look for a mentor who shares a similar identity, academic and extracurricular interests. These individuals are here to enhance your student experience by informing you about the resources on campus that you were unaware of and how to navigate and leverage them to succeed as a student. Lastly, do things outside of your comfort zone. When I ran for Miss University of Connecticut, I did not think I was going to make it past the first round because my initial perception of a pageant girl was not ideally me. Now I’m the second African American Miss University of Connecticut, and I would love to see more come after me.