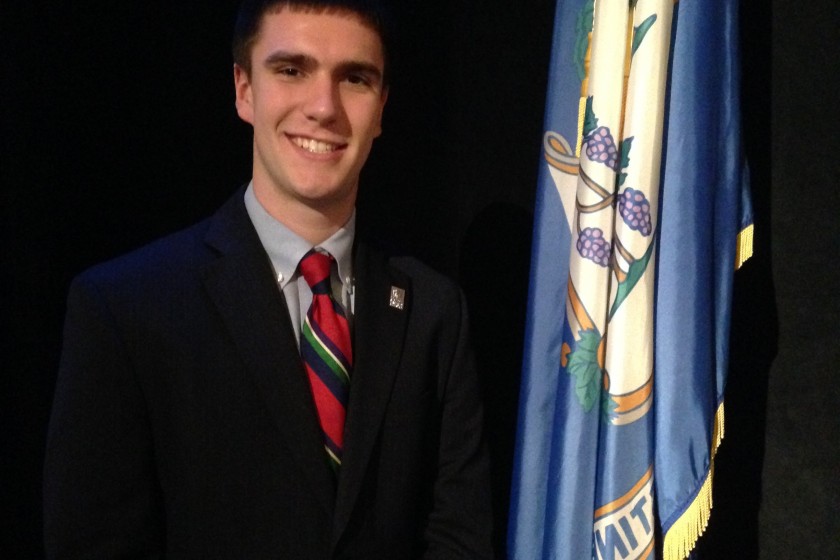 Can you tell us about some of your current involvements on or off-campus?

This is my third year as a Resident Assistant in the alumni quad and I’m also a member of Pi Sigma Alpha—a political science honors society.

What got you involved in them?

My sister was an RA, so she introduced me to that role when I got to shadow her as a freshman. My involvement in Pi Sigma Alpha came about through my course studies and through meeting people in the political science department.
(Again, a perfect example of the power of networking!)

What’s been the best part about being a student leader?

Especially in my role as an RA, being a student leader allows you to influence the people on your floor. My favorite part about being an RA is being able to lead by example. So when they see me being involved on campus and being dedicated to my studies and prioritizing the things that matter here, I can see how much of an impact I really make on other students and it’s been really rewarding.

Can you tell us a little about your summer internship with the Freedom House in Washington DC?

I was an external relations intern at Freedom House. That was kind of an utility position because I came in early in the summer so they didn’t have a lot of other interns at the moment. So I ended up doing a lot of work with the communications team, development team, as well as the congressional advocacy branch of the Freedom House. I was also able to go onto the hill and advocate for LGBTI and the International Violence Against Women Act, which was very cool.

How did you obtain it?

I applied through the University of Connecticut’s Human Rights Institute. They have a partnership with Freedom House, so they’ve been sending students down to Washington for a few summers now. Once I applied through the University, I got their endorsement to then apply through Freedom House. The UConn Human Rights Institute actually helped with funding and covering some of the expenses since living in Washington D.C. is not cheap.

What was your favorite part?

Definitely seeing the non-profit world and how it interacted with places like Congress and other think tanks and organizations. A lot of people think the nonprofit world is a lot less influential—you know when you’re coming from the Hill and going to an NGO, people think it’s just going to be another drop in the bucket, but I think the work they were doing at Freedom House was really worthwhile and was making an incredible difference in the lives of a lot of people.

What was the most challenging part?

It was very interesting getting into the process of having to get things approved. I was doing a lot of research and budget analysis type work. I was looking at this bill and it was very nitty-gritty and I put together a piece, so seeing the revision process that goes into each and every one of their articles or publications was a huge wake-up call because there’s so many people giving input and so many steps that it takes to get that final product. So that was definitely a challenge. At school, it’s your own ideas, and you put it out there and it gets graded, whereas, in an organization, you’re tasked with writing something, but there’s more people it has to go through besides yourself. It was a good real world experience.

What are your career aspirations?

I’m looking to get a Masters in International Relations from a school abroad. Law school may be on the horizon after that, but in the end I want to be working with human rights and international relations. Wherever that takes me is probably where I’ll go.

How have your internship experience and on-campus involvements prepared you for what you want to do in the professional world?

I think just learning new skills because that is what will make you appealing to employers later on. I think all of the positions that I’ve had have given me a certain skill that I can now speak to and talk about at length which will hopefully make me more appealing to prospective employers.

What has been your favorite part about being a student at UConn?

Okay, so when I went down to DC one of the questions that I was asked was, “What are you going to miss most about being at UConn?” and the internship was going to be from January until the end of the year, so I was going to miss the latter half of the basketball season. And so what I said was the atmosphere of those basketball games: the chilling effect that they have, the communal bonding that goes on there, the spirit, the pride that goes along with being a husky— you don’t get that same feeling anywhere else. It’s indescribable and it’s something that you’re only going to get on this campus. There’s plenty of things that I can say are my favorite part, but those games really emphasize the community and partnership and comradery that we all have here. We all want to do well here, but then there’s this fun little outlet that we all get to bond over. It’s bigger than basketball and speaks to a lot of things about the UConn community

Any advice you want to give your fellow UConn students?

Don’t try to jump to, “I want to be this.” Monumental steps are hard to comprehend, so focus on the stepping stones to get you to that goal. Making sure you put just as much energy into those lesser jobs will eventually get you to your final end goal.