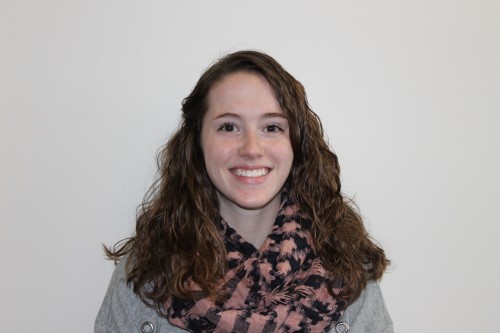 What interests you about your major and minor?

I knew what I didn’t want to do coming into college and I knew that I wanted to do something in the medical field, so I stuck with allied health. I really liked anatomy, so sometimes I wish I were a PNB major, but the courses I’m taking are really suited for what grad schools want. I’m done with all my labs and hard sciences, so I’m taking a lot of professional courses. I’m taking one that’s a teaching and counseling for the healthcare professional course, which I think is preparing me really well and making me think about things like changing your personality a little bit to suit working with clients and just little things like that that you don’t really think about when you’re taking something like chemistry.

Can you tell us about the internship you’ll be doing with Yale Surgical Orthotics this summer?

I don’t know too many details yet, but it’s for about two months. One month will be shadowing an orthotics clinician and one month shadowing a prosthetics clinician. They have an office, but a lot of times they do work on the road going to homes, hospitals, and rehab facilities in the New Haven area.

What steps did you take in order to obtain it?

Because this is such a niche field, it was hard to find internship opportunities. It’s not as straight forward of a process as it is for other majors, so I had to do a lot of googling, emailing and asking people for shadow hours. I tried to reach out to a bunch of different places and Yale told me they had an internship for the summer. They wanted to interview me, so I went down and interviewed and got the job.

How did you become involved with the UConn Skating School?

My oldest sister is in her last year of pharmacy school here and she was involved with the figure skating team. Through the figure skating team she got involved with teaching “Learn to Skate.” I was a competitive figure skater for 10 or 12 years and I kind of let it go in high school, but they needed someone, so she helped me get the position and now I’ve been a part of it for 3 years. We work with different age groups and it’s really rewarding.

What is your favorite part about being a Learn to Skate Coach?

What is the most challenging aspect of it?

Probably relating to the younger kids.

Can you tell us about your experience with the UConn Marching and Pep Band?

Band rocks.  I play trombone and I’ve done band for forever, all through middle and high school. I was a little hesitant to join as a freshman, but I’m so happy I did. We come to school a week early, so that was a really good introduction into college and the people I’ll being hanging out with on campus and by the time school starts you already know your way around and have a feel for things. It really structures your time as well, which I think is something that’s really good for freshmen when they’re just hanging out on the weekends not knowing what to do. It’s a huge commitment as well. We have rehearsal 3 days a week and then we have to attend all the football games and be up and on the buses for 7 and we don’t get back until 5 or 6. You meet lots of different and really great people.

Pep band is for the basketball teams, so it happens in the spring. Last year I went to Memphis, Nebraska, and Dallas for the Men’s Final Four and that was really really fun. It also helps with time management because you have to miss a lot of school.

How long have you been playing the trombone?

Since I was about 7.

My sister dared me to play trombone actually, but then I actually got pretty good! My parents paid for lessons all through school, so it was a big investment for them and now it really paid off. Band really teaches you a lot about people and you’ll meet the best friends you’ll ever meet.

Can you give us some background on what UConn Sexperts does and your role as a Peer Educator?

I am a volunteer peer educator for the group and I have been involved for one and half years. We discuss topics like stress management and sexual health to provide information, skills and resources to students.  We present to Greek life, students in residence halls and other student groups. It’s a volunteer role which involves an application and interview process. It’s out of the health education office.

What have you found to be most rewarding from your campus involvements and work experience?

You get to know a lot of different people.  I’ve covered a lot of bases through my involvements in peer education, ice skating, and band, so you meet a wide variety of people. It’s also nice to actually do something at school and not just hang around on the weekends. It might be stressful at times, but it’s nice to feel like you have a purpose.

It’s also given me plenty of applicable skills for the professional world. A lot of times in interviews band kids just end up talking about band a lot because some sort of skill, whether its people skills, communication skills, teamwork, etc., will come up and you’ll instantly just be like, “Oh! This one time in band…”

Where do you see yourself 5 years from now?

I would like my Master’s degree in Orthotics and Prosthetics. I’ve considered doing public health at some point, but I would really like to pursue O&P. Hopefully it all works out and I get a job that will allow me to sustain myself and it’ll be something I find rewarding.

What has been your favorite part about being a UConn student?

College is a pretty big deal, you change a lot, and you learn so many new things about yourself and other people. I’d say band has been my favorite part because my college experience just wouldn’t be the same without it. There are times when I didn’t want to stick with it because I had to study, but I’m very happy that I’ve stuck with it. I mean, you do it until your junior year you might as well do it when you’re a senior too. I’ve met great people and it’s taken me cool places, both figuratively and literally.

Any advice you can give your fellow UConn students?