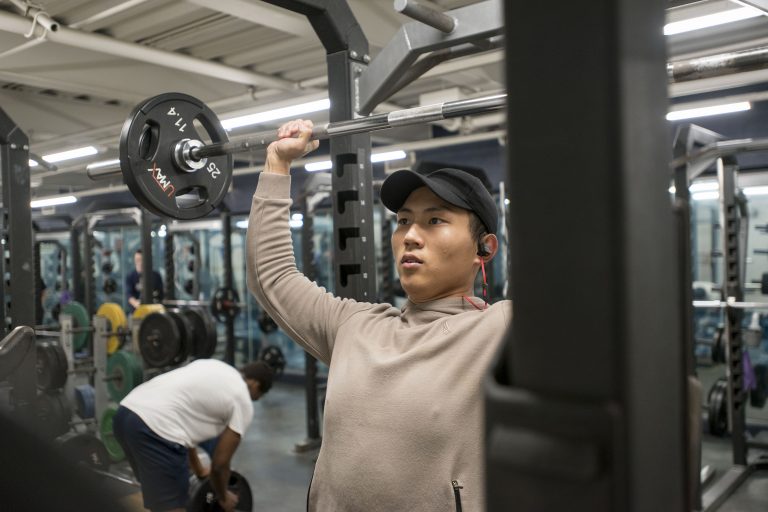 UConn senior Jiazhen Huang is not unlike a lot of his classmates in many ways. He’s made a lot of great friends in Storrs, plays intramural sports and works out a few times a week, and is a very serious student. His first exposure to UConn was also a common one – championship basketball.

The difference is that Huang heard about the Huskies from a world away – in his native Shanghai, China.

“I loved following American college sports when I was growing up, and UConn was winning a lot of championships when I was looking at schools,” says Huang, known to his friends on campus as Wong or Johnson.

Huang went to UConn Stamford his first year, and then enrolled at the main campus in Storrs. He attended a bilingual high school in China, where English was spoken during many of the classes. His family owns a factory that manufactures shoes and employs approximately 150 people.

Huang played basketball and soccer growing up and has decided that he would like to make a career out of sports. He is pursuing an individualized major in sport promotion, and minors in digital marketing.

The major the student designs must be interdisciplinary. A student must prepare a plan of study and a statement of purpose, and seek the feedback and endorsement of three faculty members with expertise in the theme of the major. There are about 130 students in the individualized major program at any given time.

Huang wants to be part of the developing sports industry in China. He takes classes in sport management and marketing, and enjoys being part of class discussions. He has also obtained hands-on experience – after his sophomore year he went home and did an internship at a company that promotes youth sports, working in operations and planning for youth squash and tennis tournaments.

This spring, he will get some hands-on experience working with the grounds crew of the Division of Athletics, making sure fields are properly prepared for various games and practices.

Following graduation, he would like to stay in the United States for graduate school and continue to learn about the sports business. He plans to eventually return to his native land.

“China is changing now,” Huang says. “More and more people are realizing the system can’t be like it was in the past. We are used to winning medals at the Olympic games, but most of those people are from schools that specialize in sports.”

American people like to talk and share their ideas; Chinese people are more private. But you can learn so much more when you talk to people.— Jiazhen Huang ’18 (CLAS)

Huang enjoys the experience of living and attending school in a different country. He has learned much about American culture and has shared the traditions of his homeland with UConn students.

“When I came to UConn, it was my first time living with American people and first time in another country,” he says. “I was very nervous my first semester, but I have made great friends here. I have learned to talk more since coming to this country. American people like to talk and share their ideas; Chinese people are more private. But you can learn so much more when you talk to people.”

Among the friends Huang has made at UConn is junior Matt Barresi, a sport management major from Hanover, Massachusetts. Barresi is a sports writer for The Daily Campus, and is also a manager for the men’s basketball team.

Barresi met many Chinese students his freshman year when he lived in Shippee Hall. “We bonded over basketball, and talked a lot about Chinese culture,” he says.

He has taken classes with Huang, and the two trade career advice.

After his freshman year, Barresi became so interested in the Chinese students and their homeland that he took a summer trip to Shanghai, Nanchung, and Beijing to visit them. He even ran into someone wearing an “Olliewood” T-shirt at the Great Wall of China.

“It was a different type of education outside of the classroom,” Barresi says. “My hometown is not very diverse, so it was a great opportunity. It was not a culture shock so much as it was unfamiliarity. China is basically an all-urban society, and the Chinese cities are immense.

“The Chinese students I have met here have great respect for the U.S. education system,” Barresi notes. “They bring a worldly experience to UConn, and have interest in our culture.”